Post Views: 6,845
The Ashen Remains of
Sodom & Gomorrah
HAVE BEEN FOUND!!!
They are NOT located under the Dead Sea,

THEY ARE RIGHT OUT IN THE OPEN!This amazing discovery was made by the late Ron Wyatt.
This material was shown on national TV for the very first time on October 19, 2001 on the PAX TV program “Encounters with the Unexplained”! To see a transcript of this show go to: www.arkdiscovery.com 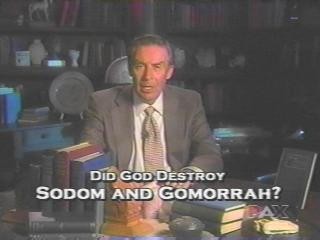 * * *
We have SOLID PROOF!!
There are giant ashen structures at the Gomorrah site, plus millions of sulfur “death balls” embedded in the ashen area!
Webster’s Dictionary defines “brimstone” = SULFUR !!!

ABOVE: The view from Masada / Sulfur balls everywhere! /The remains of buildings!

ABOVE: The”walls” around the outside of this area perfectly match the walls of other ancient cities!

ABOVE & BELOW: There are many formations in this area that look like they were once manmade! These are some of the reconstruction drawings I did for Ron Wyatt’s 1992 S&G video.

Some people have said that this area at the base of Masada is only “geological” — but would the receding of the Dead Sea leave behind PERFECTLY SQUARE sections like this one pictured above? Or what about this GIANT RECTANGULAR PLATFORM-LIKE AREA below?..
. 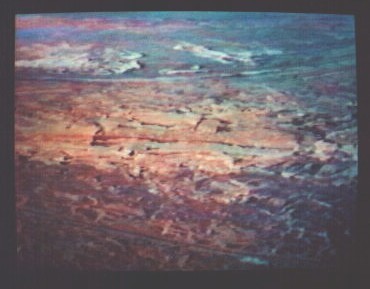 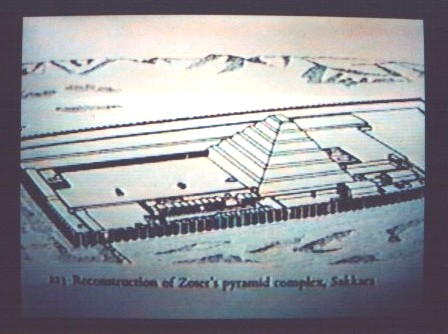 The above diagram is of the pyramid complex at Sakarra, which shows that ancient peoples used this type of RECTANGULAR PLATFORM construction!

The sphinx-shape on the flatten platform area (with Masada in the background of the right photo).
Josephus 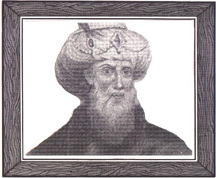 The 1st century Jewish historian JOSEPHUS wrote: “There are still the remainders of that divine fire; and the traces of the five cities are STILL TO BE SEEN…” — Wars of the Jews, book IV, chapter VIII.
And he’s right! We CAN see these ashen remains! 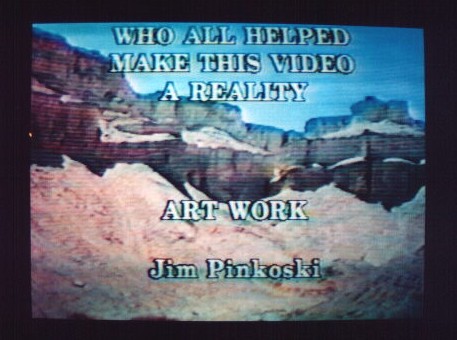 ABOVE: I did the reconstruction drawings that appear on Ron Wyatt’s S&G video. 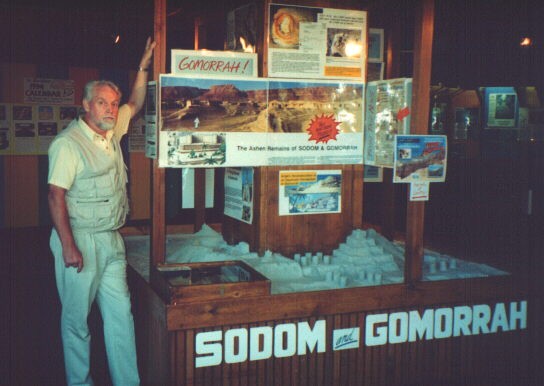 ABOVE: My 1994 photo of Ron Wyatt standing next to our Sodom & Gomorrah display in the Gatlinburg museum, and below is another view of our S&G sand sculpture
. 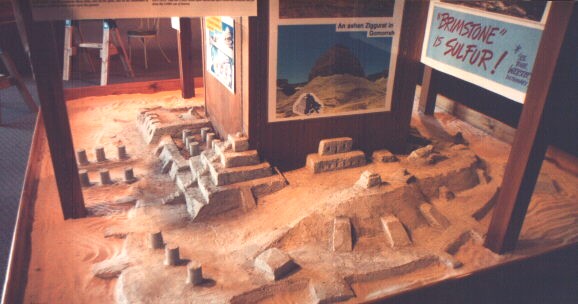 Here is a portion of the write-up that appeared in the September 1999 issue of CHARISMA magazine: 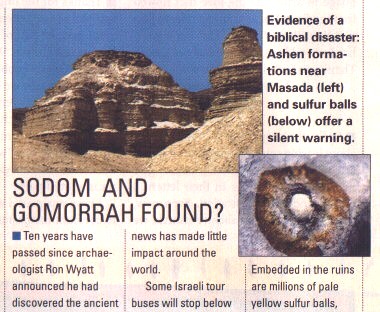 This discovery was FRONT PAGE NEWS back in 1993: 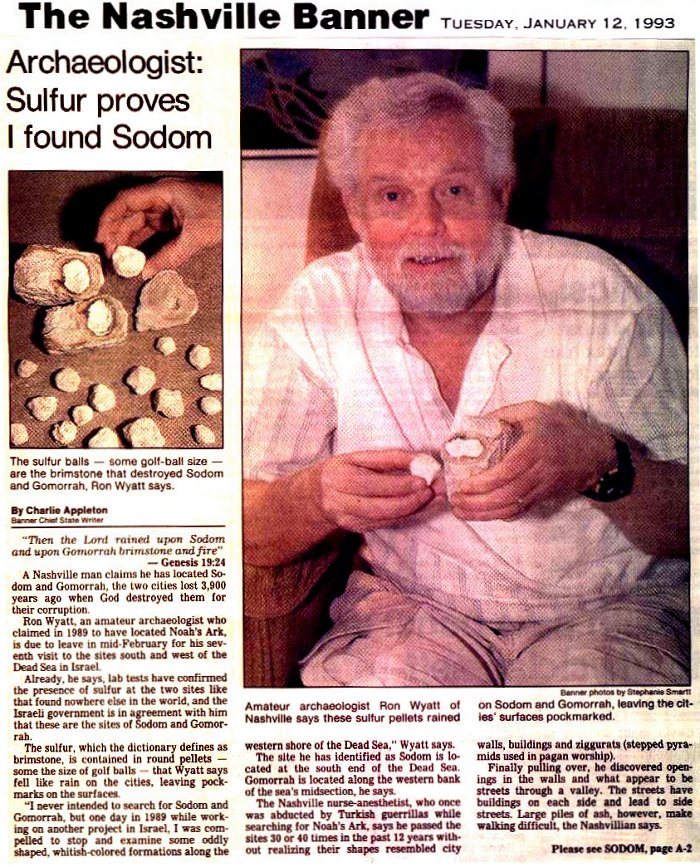 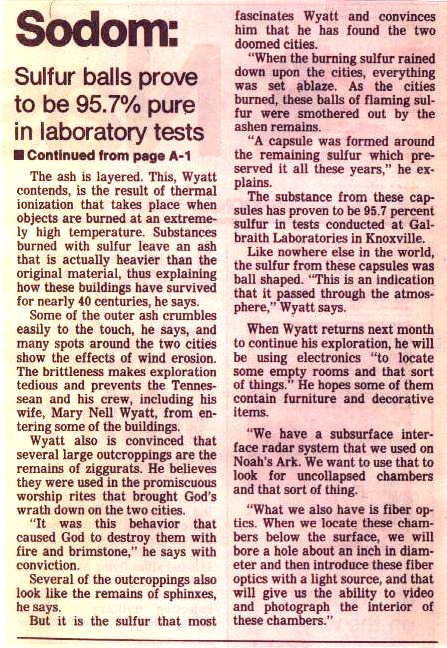 The Locations of the 5 Cities of the Plain: 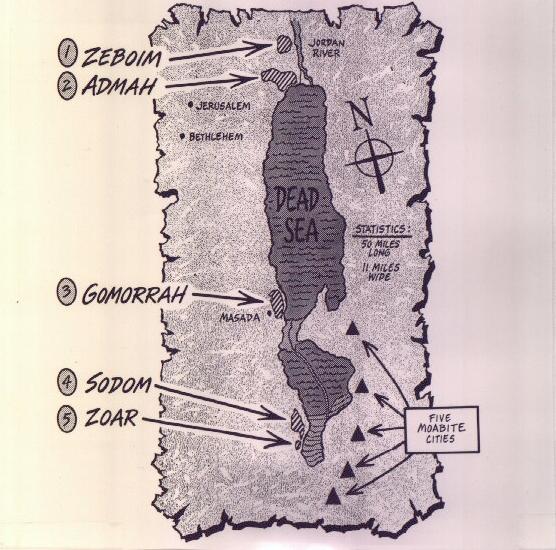 ABOVE: This map shows the locations of the 5 cities of the plain –this map appears in the Discovered: Sodom & Gomorrah magazine that I did for Ron Wyatt.
BELOW: A 3-D photo map of the locations:

Be sure to get a copy of the two magazines I did for Ron .
. 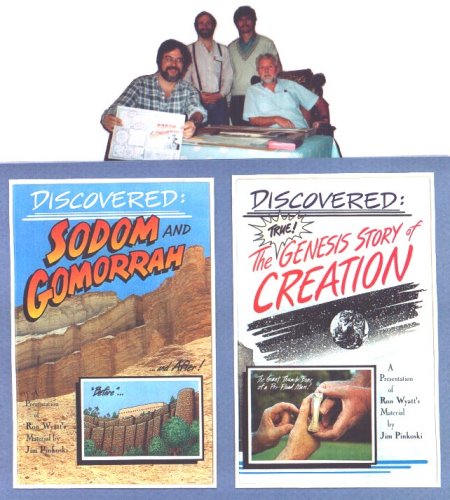 On August 27th, 1997 I submitted Ron Wyatt’s Sodom & Gomorrah material to B.A.R. magazine — I waited for 6 months –and I finally heard back from Steve Feldman, one of their editors, on February 25, 1998: “Dear Jim –Yes, we have the materials you sent us. We are not sure whether we will do anything with it, however. As you know, we cover the academic displine of near eastern archaeology and we are generally very dubious about claims by non-professionals …”Twelve months after I submitted the material to B.A.R., they finally published a review of Ron’s Sodom & Gomorrah material on September 4th, 1998, in the Sept./Oct. 1998 issue of Biblical Archaeology Review.I had honestly thought that these people would be PLEASED to see our material, but instead their comments and their review was sarcasitc, contrary, and negative — which shows me that they were really not interested in INVESTIGATING Ron’s material, they were more interested in “putting down” Ron Wyatt and “arguing” about Ron’s discoveries!In the year 2000 the Swedish scientist Lennart Moller at the Karolinska Institute in Stockholm, Sweden published his 320-page book THE EXODUS CASE, and pages 37-47 deal with Ron Wyatt’s Sodom & Gomorrah sites — and in January 2004 Michael Rood aired his new TV show entitled “A ROOD AWAKENING” and he did an excellent job of showing our Sodom & Gomorrah material!

Illogical CriticismsThe Sulfur Balls prove that our sites are “not” Sodom & Gomorrah??

Some of the criticisms we have received over the years range from ludicrous to totally absurd — and there have even been some people who have actually had the audacity to say that the sulfur balls prove that our site “cannot” be Sodom & Gomorrah! What is their reasoning for this? They point out that sulfur melts and evaporates at “a lower temperature” than various things like marble burn at, so the fire that burned S&G would have “burned up” all the sulfur balls –so they say that finding the sulfur balls actually proves that the site is NOT the site!OUR REPLY TO THIS: Sulfur balls continued to rain down upon the ashened cities AFTER in initial super-hot fire storm burned up everything, and those sulfur balls embedded themselves into the soft ash — they were cut off from the oxygen, stopped burning, and they were preserved in the ashen layers.
The Bible says that God used “FIRE AND BRIMSTONE” to destroy Sodom & Gomorrah, and that means that it is 100% logical for us to find the SULFUR BALLS embedded in these ashen remains, and that is exactly what we have found!
The “ASH” Tests 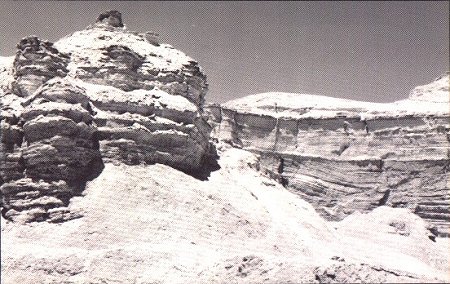 A number of people have also decided to “challenge” us about the large amounts of ash in this area — which caused us to revisit these sites and take more samples and do more lab tests. The Swedish scientist Lennart Moller did this in 1999-2000 and has published the results of his tests in his new book “The Exodus Case” on pages 37-47.These tests are very complicated, and I myself am NOT a scientist — but Lennart Moller is a very dedicated and dilligent genetic scientist who works at the Medical University of Stockholm, and I am sure that his lab tests on the sulfur balls and the ash are very thorough! He says that the ash-like substance in the area consists of a mixture of limestone, dolomite and gypsum, plus a high proportion of fine-grained sulfur– and he also found melted iron and a partially cremated skeleton in the area, all of which he documents in his book, which I quote:”All the analysis were carried out with X-ray crystallography, liquid chromatography and atom absorption spectrophotonmeters by qualified geological and analytical laboratories … The results from this analysis mean that one can explain in simple chemical terms what is most likely to have happened in this place … CO2 (carbon dioxide) is released from CaCO3 (the limestone) under intensive heat (in this case burning sulfur). At the same time the sulphur (S) is oxidized to sulphur dioxide (SO2), which reacts with water to form sulphate (SO4/2-). The calcium ion (Ca2+) can then react with the sulphur ion (SO4/2-) and form calcium sulphate (CaSO4). Calcium sulphate is what we call gypsum. Analyses of the dominating mineral in this area show that it is gypsum.” –Page 41
The tests on the “ash” prove that it is ASH! 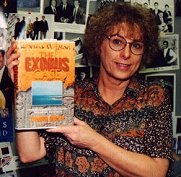 ABOVE:  My wife Sandra hold Lennart Moller’s 320-page book “The Exodus Case” — it is available in the USA from www.anchorstone.com in Florida, or from Sweden at this website: www.leocordia.com/exodus/ (or check on Amazon.com)
Order Ron Wyatt’s Video/DVD Today ! 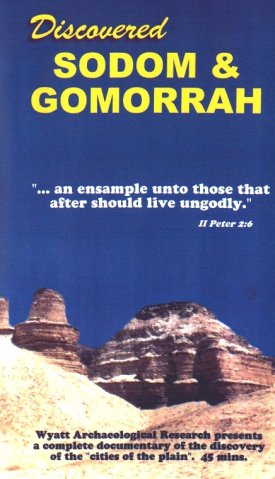 Ron Wyatt’s 45-min Sodom & Gomorrah video is available from WYATT ARCHAEOLOGICAL RESEARCH — contact their museum at (931)293-4745 or call toll-free 1-877-992-8865
For more information and photos of the Sodom and Gomorrah discoveries, please visit the W.A.R. Museum website at www.wyattmuseum.com
or visit these other websites:
www.anchorstone.com
www.arkdiscovery.com
www.discovered.net
www.biblerevelations.org
www.bibleplus.org/discoveries/discoveries.htm

(c) 2011 by Jim Pinkoski. Jim’s photos and text are the protected private property of Jim Pinkoski. It is offered freely for your review on this web site, however, any reproduction of further use of any text or images contained in this material must be done only with prior written consent of Jim Pinkoski.