Ark of the Covenant

Yes, it is very controversial…

No, all the details cannot be verified at this time…

found the ARK OF THE COVENANT!!!

Ron Wyatt said that he found the Ark of the Covenant in the Garden Tomb area in a cave UNDER THE CRUCIFIXION SITE OF JESUS — and when Christ died on the cross and the Roman centurion stabbed the Son of God in the side with his spear, the blood and water went down through the earthquake crack at the base of the cross AND CHRIST’S BLOOD WENT ONTO THE MERCY SEAT OF THE ARK OF THE COVENANT !!! 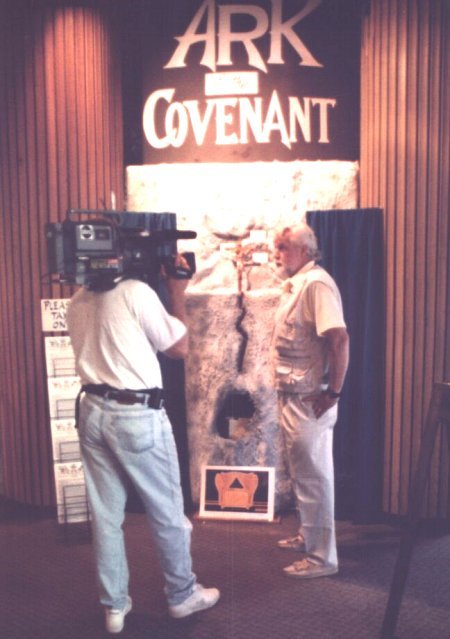 I took this photo of Ron Wyatt giving a TV interview in front of his Ark of the Covenant display inside Ron’s 1st museum in Gatlinburg in 1994 — and as of the posting of this website there have been tens of thousands of people around the world who have heard about and been blessed by Ron Wyatt’s incredible Ark of the Covenant scenario!

I did the drawing of the Ark of the Covenant for Ron Wyatt that was printed in his newsletters and put onto his videos.

Why did I have to do a “drawing” of the Ark for Ron?  As you are about to see, the reason was that all of Ron’s photos of the Ark in that cave were GLOWING!  You will see Ron’s amazing photo of the Ark further down this page — but that is why we needed to do a drawing of what the Ark looked like. 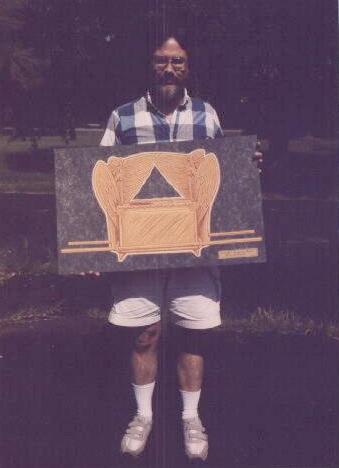 I can still see myself there in Ron and Mary Nell’s kitchen in their home in Nashville, listening to Ron describe to me how the Ark of the Covenant looked — and I can still see how Ron and Mary Nell “posed” for me by standing on either side of their round kitchen table holding their arms up to show me how the Cherubims’ wings stretched out and touched along the back side of the Ark — and I sat there at their kitchen table and sketched out my drawing in pencil, following Ron’s precise description of the Cherubim and the Mercy Seat and all the other details.

The Ark of the Covenant does not look like most of us expected the Ark to look like — most renderings of the Ark show the Cherubim actually up “on” the Mercy Seat lid — but Ron says that the Cherubim are actually standing on the SIDES of the Ark.  If you think about it, this makes more sense — after all, the Ark of the Covenant represents the THRONE OF GOD!  Do mere angels belong “on” God’s throne?  No, they would be standing beside God’s throne.

After I had the pencil drawing completed and approved by Ron, then I went home and I did the finished pen and ink drawings, and these were the drawings that were printed in Newsletter #4 that came out in July, 1993, about a year before we opened up Ron’s 1st museum in Gatlinburg.  I very rarely do my art in full color, but I felt impressed to do a color rendering of the Ark of the Covenant — and the end result was the color drawing that I am holding in the above photo.  Mary Nell took that picture of me holding my drawing, standing out in their driveway in the back of their old Nashville duplex.  I did two of these color drawings — Ron used the first one in his presentations, and I’ll tell the rather amazing story of the 2nd drawing later.

My color drawing of the Ark was edited onto Ron Wyatt’s Presentation of Discoveries video, and the photo below was taken off of a TV screen of Ron showing the drawing during one of his several TV interviews on Channel 39 in Nashville. 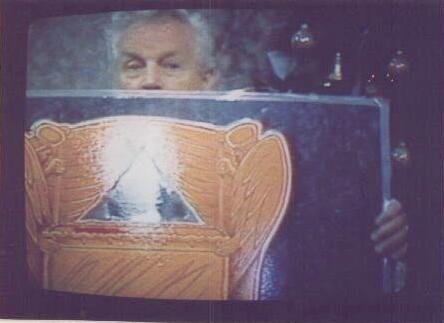 The Ark of the Covenant Display in the Gatlinburg Museum

This display, in my opinion, was the best of the 3 different displays of the Ark of the Covenant that we put together in Ron’s 3 different museums!   When our Gatlinburg museum had to close down in October of 1996, I stored and saved this display — and I have been looking forward to the day when I can once again set up this display inside another museum! 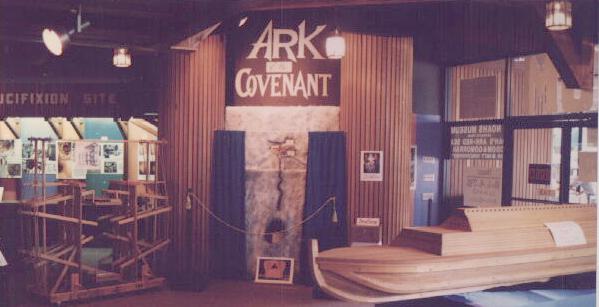 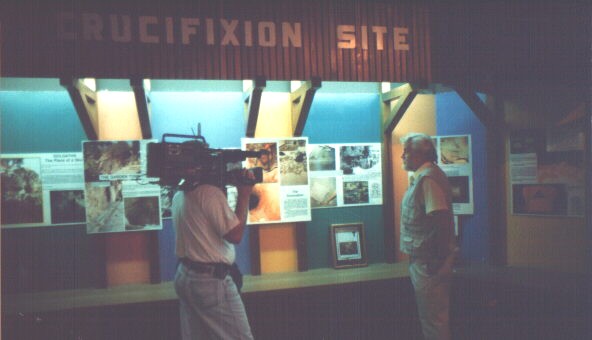 Ron giving an interview in front of the Ark of the Covenant photoboards display inside the Gatlinburg museum in 1994.

When we opened up the Museum of God’s Treasures in Gatlinburg in 1994, I did a flyer that clearly explained Ron Wyatt’s Ark of the Covenant scenario, and I handed out this flyer to the thousands of visitors that came to see our museum!

Click the Flyer link at left to see that flyer 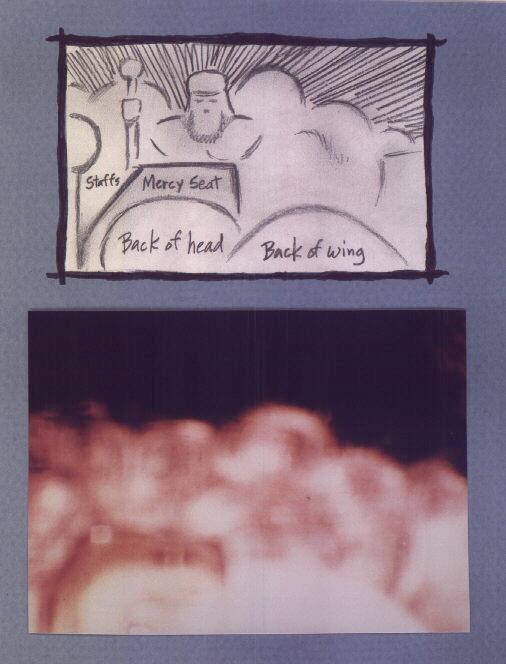 Ron’s Photo of the Ark of the Covenant !!!

We had over 300 full color pictures on approximately 90 photoboards on display in the Museum of God’s Treasures in Gatlinburg — and ONLY ONE of those 300 pictures was a “fuzzy” picture, and it was fuzzy for a special reason!  The reason was that God did not want us to be able to see the Ark of the Covenant yet!

I always considered this photo to be an extremely AWESOME photo — just think about it!  Did God let “just anybody” look upon the Ark?  NO!  The Ark of the Covenant was placed inside the Most Holy Place of the 1st Temple in Jerusalem, hidden away from the sight of all but the High Priest of the nation of ancient Israel, and he walked into the presence of the Ark ONLY ONCE A YEAR on the yearly Day of Atonement !

Ron said that he took this picture of the Ark while looking over the shoulder of one of the Cherubim, facing towards the other Cherubim on the opposite side, and, even though there is a certain amount of distortion in the glowing picture, we can still make out the position of the Mercy Seat, the staffs, and both Cherubim.

I showed this glowing photo to thousands of people who came to our museum, and most of the people knew immediately how awesome this photo was, but occasionally there were some folks who commented that they were somewhat disappointed that the picture was fuzzy, and they would ask me, “Why didn’t the picture turn out better?”

I would explain the situation — the Shekinah Glory resided above the Mercy Seat for quite a long time, and who knows what kind of power radiated from God’s presence?  So here comes Ron Wyatt with his camera with its flash and its film with “light-sensitive film emulsion” on it, and Ron snaps his flash pictures of the Ark of the Covenant inside this darkened cave — so who knows what kind of radiant energy could be reflecting off of the Ark of the Covenant and hitting the camera’s sensitive film?  And my final comment to those visitors would be that I think that this picture came out PERFECTLY!

God intentionally blurred the photos, because, as Ron often explained over the years, this prevented him from showing the Ark to some people who proved to be untrustworthy.

Ark of the Covenant: Part 2