The Gatlinburg Passion Play did its last performance on Thursday, October 17, 1996.  The Museum of God’s Treasures was inside this complex for 2 1/2 years, up until Pastor Corky Bell lost the building — it is a sad story of how this happened, but it is a story that should be told so that others might learn from it. 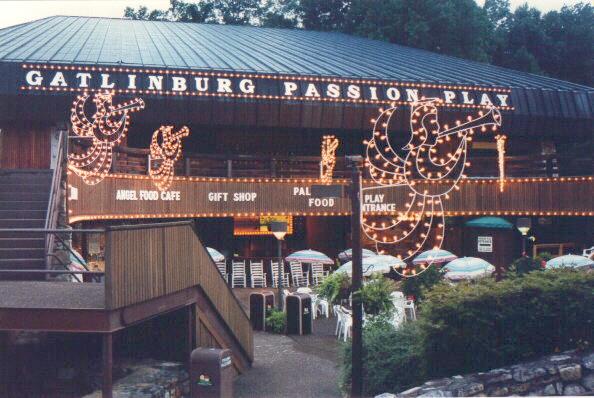 Pastor Corky was a very “driven” Christian man, and these type of people often do a great work for the Lord — but, as God bestows more and more blessings upon them and their ministries, they have to be very careful.  The Bible says, “To whom much is given, much is required.”  Pastor Corky was basically “given” the free use of an extremely wonderful $12 million complex, and then he was “given” Ron Wyatt’s extremely important discoveries to display at his complex.

When we accept a work to do for the Lord, it often entails us having to step forward and “take the stage” and talk to people, and this is what Pastor Corky did very admirably.  Before and after each performance of the Gatlinburg Passion Play — (we did 175 shows per season) — Pastor Corky would stand up in front of each audience and tell the wonderful story of how he got the use of the complex.  I always enjoyed hearing the story, because I feel it is very important for us to speak of how the Lord has blessed us.  But Pastor Corky had a problem letting anyone else speak up there on his stage . . .

To explain the situation briefly, over the 2 1/2 years that I managed the museum in the complex there, Pastor Corky would NEVER let me come up onto his stage and talk to the audiences about the museum — and he very rarely let Ron Wyatt come up on stage to speak to the people about his discoveries.

There is no doubt that Pastor Corky truly loved his Passion Play, but he came to consider the discoveries in the museum as “trivial,” as if they were secondary to his play.  He forgot that God’s Real Things were inside our museum — and he began making some very poor spiritual decisions.  I won’t go into all the details, but I will tell you one story that should clearly show that there was a problem here.

Pastor Corky was born Jewish, but raised a Baptist — and one day we heard that he was planning to make his very first trip to Israel.  This was great news, and my wife and I mentioned to him that he really ought to go over there with one of Ron Wyatt’s tour groups!  He would see all the same sites, PLUS Ron would be able to show him the Gomorrah site, the Red Sea crossing site, and the site of the Ark of the Covenant dig, etc.!  But for some unknown reason, Pastor Corky decided not to go with Ron, and he went instead with some other group — and, while he was away on this trip to the Holy Land, Pastor Corky Bell LOST HIS PASSION PLAY BUILDING!

Just before Pastor Corky left town on that trip, he was in the process of making an offer to the owners of the building to buy the complex.  Another local businessman that disliked the Passion Play heard about the complex being up for sale, and while Pastor Corky was out of town on his trip to Israel this man made a slightly higher bid — AND THE OWNERS SOLD HIM OUR BUILDING!  When Pastor Corky came home from that trip, he was stunned to see that he had LOST his building!

Things like this DO NOT HAPPEN unless there is a very important spiritual reason.

Just as the Jewish people lost their Temple in AD 70 because they rejected “moving forward” with the awesome new spiritual Truths that God gave them via their Messiah, Pastor Corky Bell lost his building while he was away on his very first trip to Israel because he considered it “a trivial thing” to be granted the awesome privilege of housing the very first museum on this planet that ever featured the discoveries of Noah’s Ark, Sodom & Gomorrah, and Mt. Sinai, etc.

Ron had even told Pastor Corky that HE INTENDED TO DISPLAY THE TEN COMMANDMENT STONES THERE AT THIS VERY MUSEUM WHEN IT WAS TIME TO FINISH THE ARK OF THE COVENANT DIG — but Pastor Corky decided that all of this was “secondary” to the performing of the Passion Play.  Accordingly, it looks like God removed His protection from the complex and then the complex was removed from Pastor Corky’s control.

The Entire Complex gets Closed Down

The new owner of the complex greatly disliked Pastor Corky and basically bought the complex to “stop” the Passion Play — this new owner issued eviction notices to ALL the businesses in the complex (the Passion Play, Ron’s museum, a moped rental business, and a small snack bar business), and the new owner brought his workers over to the complex and one of the first things he had them do was to paint over the museum’s wonderful billboard sign . . . 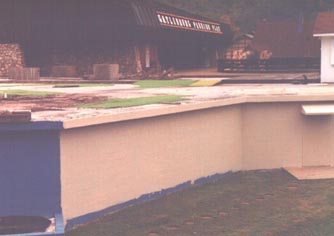 Marty Plott and Mary Nell drove to Gatlinburg to pick up some of the larger items, Ron’s pyramid building machine models and the 15-foot model of Noah’s Ark . . . 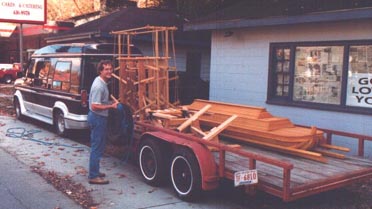 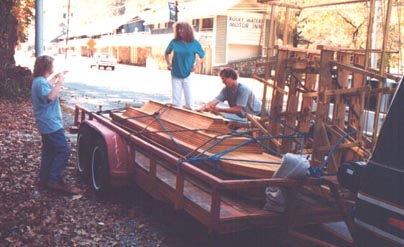 Everything was removed from the museum — all the photoboards, all the displays — and here is what the museum space looked like after we moved out — completely empty, completely unused — and this is how it has been for the past 4 years.

The building has gone back to being a Mega Movie Theater.  It was very sad to see the Gatlinburg Passion Play Complex closed down — but it seems that these things had to be taken from a pastor who did not respect The Real Things of God.  It just goes to show that God is extremely serious about these discoveries. 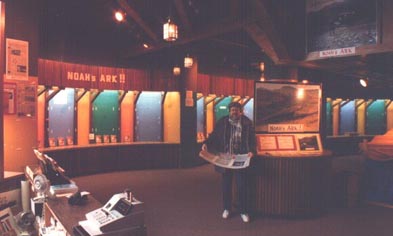 What a DEPRESSING EXPERIENCE!

Was I “happy” about losing our Gatlinburg museum?  NO!  It was an incredibly depressing experience — but there are times when we have to see things from GOD’S PERSPECTIVE — God let this museum be closed, so like it or not we had to accept this — God closed this door, but we knew He would open another door for us in due time.

When the Gatlinburg museum closed in late October 1996, Ron began looking for a place to set up another museum, and the Cornersville museum was opened in August 1997 because it was near where Ron lived.  Was it a total disaster to not have a museum for about a year?  No — the discoveries are going to go out to ALL THE WORLD, so it is much more important for us to have our websites up and our videos circulating!  Museums are “nice,” but that is NOT how the overall work is going to be accomplished — can someone who lives in Europe or Africa easily visit a museum that is in Tennessee?  Of course not!  But a person who lives in Europe CAN obtain a video or get themselves a computer and see our websites on the Internet!  THAT is how this work is going to impact “the whole world” — so museums will come and go, but there is no way that the 6 billion people on this planet will ever all come to Tennessee to see the discoveries!

I saved the Ark of the Covenant display

For the past 4 years I have kept and stored the Ark of the Covenant display — awaiting the day when it can be repaired and set up so I can once again talk to people about Ron’s wonderful discoveries!  Below: Me and Bill Fry, the person who runs the http://www.anchorstone.com/ website. 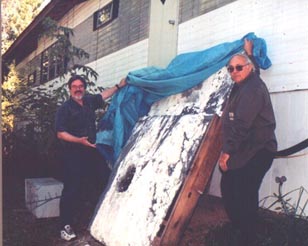 The Failed Plans of Pastor Corky

When the Gatlinburg complex closed, Pastor Corky immediately began planning to build an even bigger Passion Play Complex. He hoped to build a 2,000-seat theater that resembled the Temple in Jerusalem, and I was one of the people who helped him with the design of the building!  But, sad to say, it appeared that Pastor Corky had “no intentions” of including the museum in this wonderful new complex.  Again, he just did not understand the true importance of the discoveries —  SO THIS PROJECT ALSO FAILED!  He even printed up a very expensive advertising brochure to announce the new complex’s coming performance season — (I myself took nearly all the photos that were used in the brochure!) — but God did not permit him to build this complex.  It never opened.  (The photo below shows only about 1/6th of the brochure.) 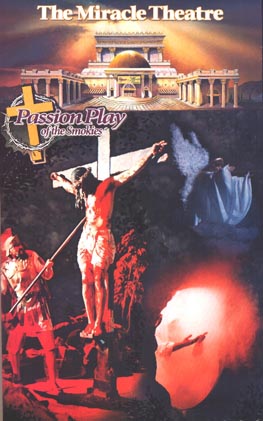 NOTE:  My wife Sandra played the angel above the tomb in many of the Gatlinburg Passion Play performances, and she considered it to be one of the best experiences of her whole life!  She loved being in that play — and she really, really misses it.  Remember, we did 175 performances per year!  That is Sandra in the photo below wearing her blonde angel wig, and her angel-friend Connie. 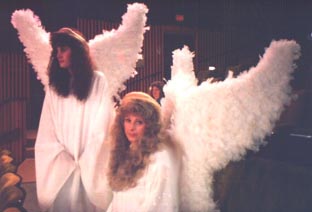 The photo below is the photo I took of our wonderful ascension scene, and it was printed in all of our 1995-1996 brochures — (Remember, we did this play inside an old IMAX Theater building with a roof that was 7 STORIES TALL!  The ascension scene of our play was absolutely SPECTACULAR!  If you want to see what it looked like, I included it on my SPECIAL VIDEO #1.) 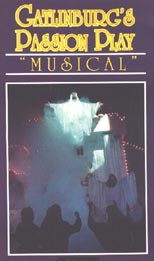 Pastor Corky Bell passed away on Sunday, September 24th, 2000 — he was 57 years old.  Pastor Corky had some major health problems even back when we were doing the museum and the Passion Play, but those health problems intensified over the past 4 years since we lost the Gatlinburg complex.  The funeral was held in his home town of Birmingham, and attended by at least 500 people.