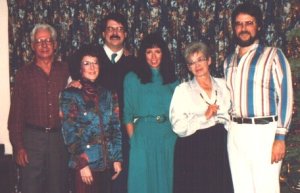 ABOVE:  The Pinkoski family — my Dad (a retired finance director), my younger brother Ken (an architect) and his wife Lisa (a clothes designer), my younger sister Linda (a lab tech ), my Mom and me circa 1987. 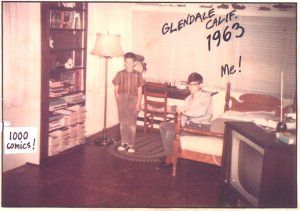 ABOVE:  My old room in 1963!  My dad took this photo because he built that bookcase — and this is why I have a neat picture of my old comic collection!  A year or so later when we moved from Glendale to the SF Bay Area, my dad made me “get rid” of all of those comics — 500 were donated to a hospital, and 500 or so were sold to a used book store for a penny a piece!  ARRRRRRRRRGGGGGGGGGGG . . .

I wanted to be an artist and a cartoonist since I was 10 years old — I am entirely self-taught, and I learned to draw from copying and tracing my favorite comic artists.  I was voted “Most Artistic” in my high school yearbook — I loved reading and drawing science fiction, and I was glued to my TV set the night that THE OUTER LIMITS began on September 16, 1963 — 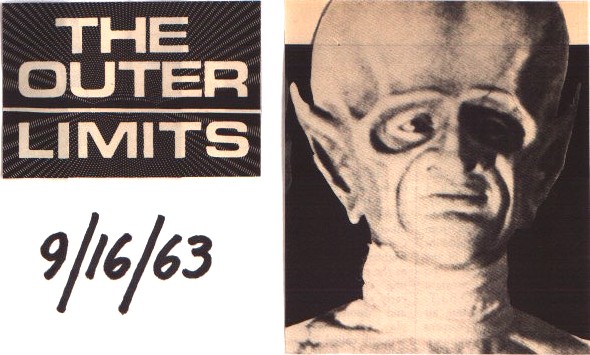 The Control Voice started the program:  “THERE IS NOTHING WRONG WITH YOUR TELEVISION SET.  DO NOT ATTEMPT TO ADJUST THE PICTURE.  WE ARE CONTROLLING TRANSMISSION … WE CONTROL THE HORIZONTAL, WE CONTROL THE VERTICAL.  WE CAN ROLL THE IMAGE …” and guess what happened?  MY old television (the one that is in that picture with me and my comics) KEPT ROLLING THE IMAGE!  I had to get up and fiddle with the horizontal button in the back of old TV set to get the image to STOP ROLLING!  HA!  That sure made that night stick in my mind!   I started drawing a comic strip called “The Aliens” and my aliens had “big heads” like the guy from the 5th Outer Limits show (but no mouths, because mouths were hard to draw …), and my strip was serialized in the Sacramento State school newspaper and their campus magazine in 1968-69! 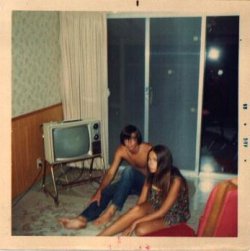 Do you remember where you were when man landed on the Moon?  I DO!  I had my younger brother Ken take this photo of me and my sister sitting in front of the TV in the house our parents had leased for a year in Concord, California — and I remember going out into the back yard that night and looking up at the Moon in awe of this event!!   BELOW: Several years later, in 1986 when I moved to the D.C. area, I made sure that I visited the Air and Space Museum! 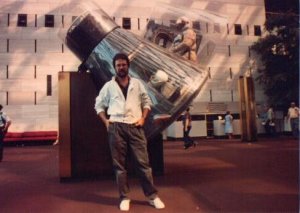 I was raised Presbyterian, but our family eventually stopped going to church.  In 1968 I went off to college at Sacramento State College, but dropped out in my 2nd year — I only wanted to take ART classes, but the school made me take all these “general education” classes!  Yuck!  I should have known that the only school I really belonged at was an Art School — or better yet, I should have been in a cartoonist studio somewhere, but all of those seemed to be in New York or Los Angeles — not where we lived! 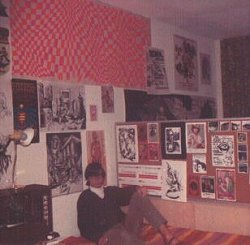 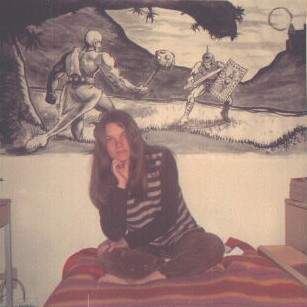 I came back to Christianity in December 1984 while living in the San Francisco Bay Area, very pleased to finally understand how Jesus/Yeshua fits into “The Big Picture”!  Then, in August 1985 , The 700 Club ran a series of stories about the possible discovery of Noah’s Ark, and I recorded and saved those TV programs. Four years later I met Ron Wyatt  — I heard about his work in Turkey dealing with Noah’s Ark, and I asked Ron if he had ever seen those reports that ran on The 700 Club , and Ron said, “No, I’ve never seen them” — so I handed him that videotape, and Ron was VERY appreciative!  I was rather amazed that no one else had ever provided Ron with this footage. After all, how many thousands of Christians watch The 700 Club?  From that point on I was deeply impressed that the Lord had arranged our meeting, and I became determined to help Ron in any way that I could — I knew that I was “in the right place at the right time!”

Over the next 10 years I assisted Ron in several ways: I helped Ron do some of his speaking engagements at various churches, I illustrated and co-authored 2 of Ron’s magazines, I did the color illustrations for his Discovered: Sodom & Gomorrah video, I designed his newsletter logo — and in 1993 I drew the Ark of the Covenant for Ron Wyatt, which was a great honor!  Next, when Ron had the opportunity to open up his 1st museum in 1994 inside the beautiful $12 million Gatlinburg Passion Play Complex in Gatlinburg, Tennessee, Ron appointed me as the manager/curator of the very special Museum of God’s Treasures . . .

This BIO has been split into 6 pages, to continue go to Part 2 . . .
Next Page
(c) 2000-2015, Jim Pinkoski. Jim’s photos and text are the protected private property of Jim Pinkoski. It is offered freely for your review on this web site, however, any reproduction of further use of any text or images contained in this material must be done only with prior written consent of Jim Pinkoski.