My job in Gatlinburg was mainly to manage the museum, and (as I’ve mentioned elsewhere on this website) my wife Sandra performed in the Passion Play — and we did 175 performances a year!  BELOW:   I too have “gotten into costume” now and then — here I am dressed up as a Roman soldier when I was in the 1985 NATIVITY DRAMA that was performed in Takoma Park, Maryland , which is near Washington, D.C.   (Hmmmmm — I didn’t know that Roman soldiers wore glasses . . .) 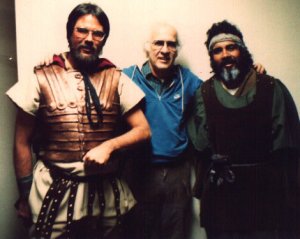 Me, Frank Araujo the director, and my friend Mark Pedro
SPECIAL NOTE:  Frank Araujo had the honor of being the very first Christian play producer who was able to stage the 1981 and 1982 Jerusalem Passion Play in Shepard’s Field in Bethlehem!  A $25 hardcover photobook entitled The Last Hours with Jesus was published in 1982 by Doubleday, and it was a great honor to work with this very talented director in 1985!  Yes, we filmed our 1985 Nativity Drama — we had horses and camels and sheep, and, if I remember right, we got our costumes from a rental place that had the costumes that were used in the movie The Ten Commandments!

Back in 1991 I was a guest on the Herman Bailey’s well-known “ACTION 60s” talk show — on this program I was there to discuss the Sabbath/Sunday issue, not the discoveries. 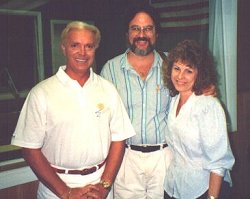 ABOVE:  Herman Bailey, me and Sandra.   BELOW: Me on the set being interviewed. 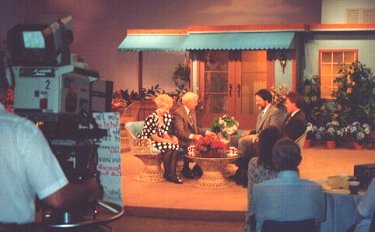 BELOW:  This was one of my banners that I did for a 1990 Christian tent crusade in Florida. 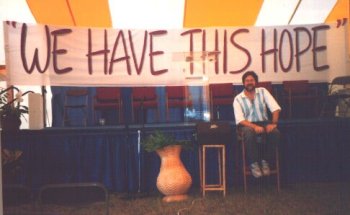 (Hey, this is MY website — and I can put anything up here that I want to put up here, RIGHT? ) 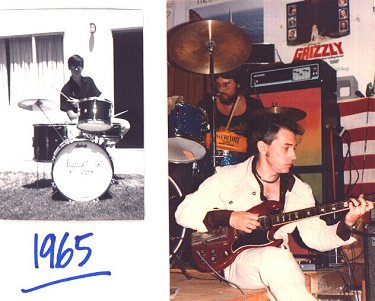 ABOVE LEFT: I got my 1st drumset when I was 15.   ABOVE RIGHT: Here I am jamming with a rather well-known New York cartoonist by the name of Jim Steranko in 1978.  Drums were only a “hobby” for me over the years — most of my time was spent drawing!  Do I still have my drums?  Nope — I got rid of them back in 1993 or so. 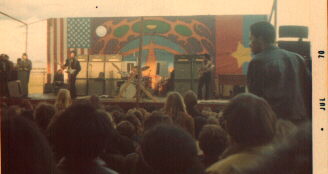 ABOVE:  While we are on the subject of “music,” I saw JIMI HENDRIX perform twice!  This is a photo I took with my old instamatic camera of Hendrix performing at an outdoor concert in 1970 at the Sacramento Fair Grounds in California.

BELOW:  I was at the CREAM concert in San Francisco in 1968 the weekend they recorded the live portion of their “Wheels of Fire” album — and I was very appreciative of Ginger Baker’s amazing drum solo!  After all, I WAS a drummer too!  ( That’s MY photo on the right . . . )

BELOW:  Back in 1968 I took an old army shirt and painted it with bright psychedelic glow-in-the-dark colors, and I wore it to some of these concerts — here it is modeled by one of my old girlfriends.  I wish I had a photo of the back of the shirt, but I don’t seem to have one — that shirt looked spectacular under a black light!