BELOW:  Some neat “old photos” of my Dad and Grandfather!

My father was a gymnast in his early years, and this was a picture of him doing an “L” in his parents’ backyard back in the 1940s before he joined the Navy — I had a poster print made of it one Christmas, and there is my nephew Victor (now a teenager!) sitting in front of it!

My grandfather came to the U.S.A. from Poland around 1915 — he was an extremely talented  professional glassblower!  He made two of these incredible glass tassle lamps, and was offered $1,000 each for them back during the Depression — but his wife told him she would leave him if he sold them, so the lamps are still in the family today!

My wife Sandra did this job for about 8 years (she’s a book editor now with a local publisher), and she had the chance to meet and interview some very interesting people!  She has taken pictures of forest fires and landslides, Presidents Clinton and Jimmy Carter, hundreds of Gospel Music singers, and she does a full page of Religious News in each week’s paper!   BELOW:  Sandra and Patricia Neal, the actress who starred in one of my favorite SF movies, The Day the Earth Stood Still . . . 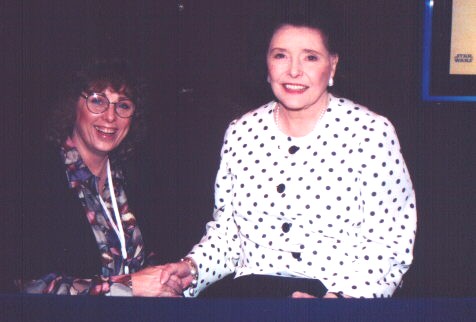 This happened in March 2000 — Sandra had a real bad migraine headache and we found out that she had a brain tumor the size of a golf ball in her head!  The operation went perfect, thank the Lord — she has had a few headaches since the operation, but for the most part she is OK — and we hope she contiunes to do OK ! 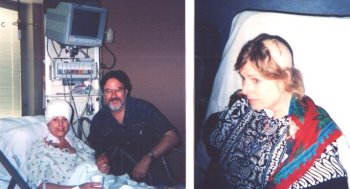 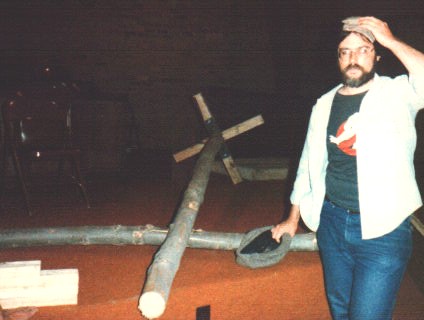 Back in 1987 I was in a church play at the SDA Church in Frederick, Maryland  — we were cleaning up after the performance, and I was kneeing on the stage area doing something when somebody pulled a wire and it caused the middle cross of our 3 wooden tree crosses to topple forward and that thing HIT ME RIGHT ON MY HEAD!!  Fortunately it glanced off the side of my head, and I was wearing my cap — I collapsed under the cross, and the people who saw it happen were sure that I had to be *DEAD!*  — I did not pass out — and I was very lucky that I sustained no permanent damage, praise the Lord!  Looking back over this event, I can see “why” God let it happen — at the time I was getting really depressed about certain things, and God let this little knock on the head  happen to remind me that I NEEDED TO APPRECIATE LIFE!   Accordingly, I know that God is rather “serious” about certain things, and He can play “hard ball” at times — He almost killed me with Jesus’ cross!!    OUCH!

My Favorite Painting at the Smithsonian Museum in D.C. 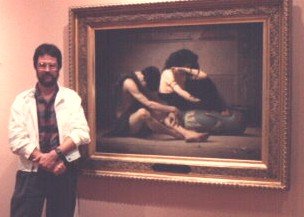 I found this painting at the Smithsonian in 1987 — the title of it is “Lamintations over the Death of the First Born in Egypt” — the realistic detail on this painting was exquisite!

Me & Desmond Doss — and the Discoveries Paper ! 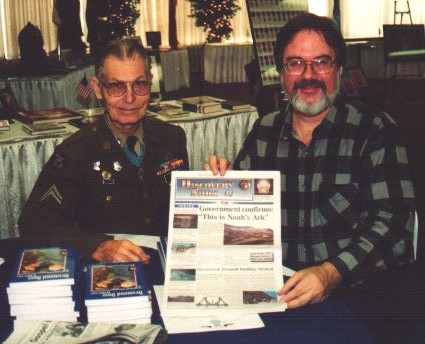 Desmond Doss is one of only two conscientious objectors to receive the Congressional Medal of Honor for saving the lives of 75 men in World War II in Guam by President Harry Truman — only 431 of the 16 million men in uniform received this medal.  He is an SDA who lived in the Chattanooga area, and in 2002 I had the chance to give him a copy of Ron Wyatt’s DISCOVERY TIMES paper!  Below is a photo of Sandra with Desmond and his wife.

A SAD NOTE:  Desmond Doss died on March 23, 2006 — but fortunately film maker Terry Benedict managed to do his wonderful award-winning documentary film on Desmond’s life story in 2004, and a major Hollywood film about Desmond Doss is going to be made!  It was truly wonderful to know this man.

BELOW:  Standing in front of Elfred Lee’s really nice painting of Jesus/Yeshua standing among the 7 candlesticks described in the Book of Revelation. 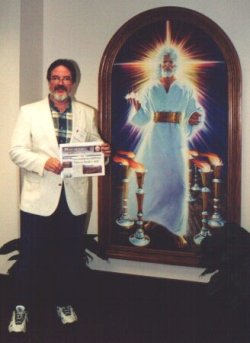 BELOW:  Me and the late Joe Crews, the man who started the AMAZING FACTS ministry — this picture was taken soon after my first book was published in 1986, back when they still had their offices in Frederick, Maryland. 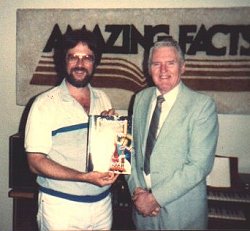