Open approximately 8-9 months, from March to November in 1995 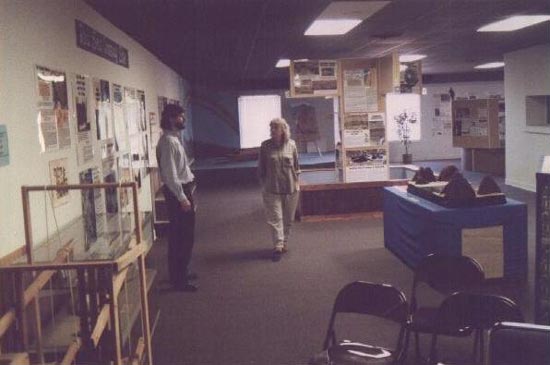 Ron Wyatt’s 2nd museum was located on Music Row in his home town of Nashville.

Bruce Patterson was the manager/curator of this museum. Bruce is a good friend of ours, and the musician who wrote the great AofC song, Mercy Seat  — (yes, we have copies!)

This museum experienced “moderate” success, but we could not afford to do extensive advertising, so at the end of the tourist season in November the landlord of the building decided to close down the museum and try putting in a “Flea Market” type of store in there instead, but it too failed — and the old building was then leveled and turned into a parking lot in 1998.

The entire building is GONE now! 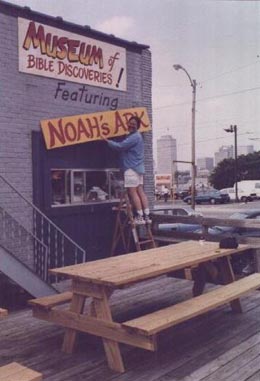 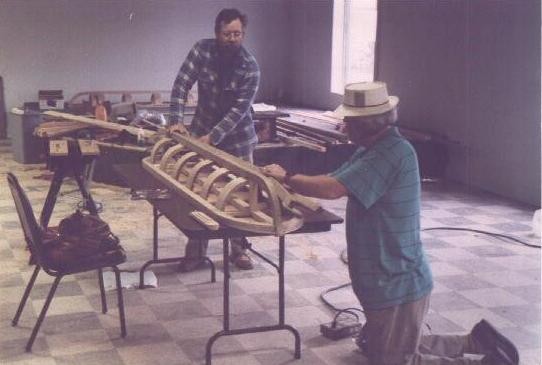 Ron’s 15-foot model of Noah’s Ark was on display in the museum in Gatlinburg, so Ron needed to build another model for this museum, but this time it would only be about 6 feet in length.  The above photo shows Ron being assisted by Randy Osborn, a professional carpenter who helped Ron with the construction of all 3 of Ron’s museums. Randy had previously worked on the larger boat model, and Randy was one of the lucky folks who had the opportunity to work on the Ark of the Covenant dig in Israel.

In the photo below I am holding one of the 90-100 photoboards that were posted on the walls of this museum.  These photoboards were made by taking our pictures to Kinko’s Copies and using their color copy machines to enlarge the photos into various sections, and then we would “splice them together” and then laminate them to make our poster-sized photoboard displays.  I was the one who stumbled onto how to do this back in 1994 — I had made a huge 16-panel full color blow up of the Noah’s Ark site , and I brought it over to show Ron and Mary Nell, and we knew that this was the only way we could afford to do good-sized displays if and when we ever had the chance to set up a museum, and it worked great! 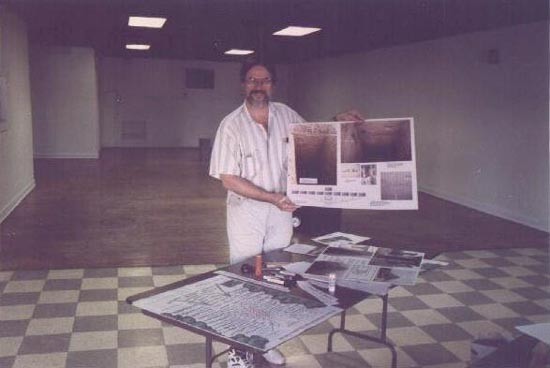 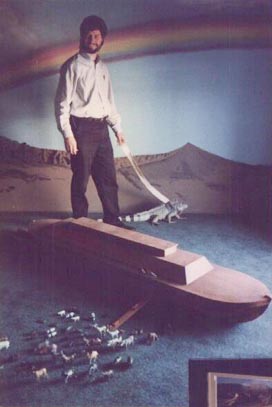 Here’s what the finished small model of Noah’s Ark looked like, compete with all the animals exiting the boat.

That background wall painting was done by another artist of the actual mountain range that is above the Noah’s Ark site in Turkey — (I can’t be on hand all the time to do all of Ron’s paintings ! . . . )

And there is Bruce Patterson taking Ron’s 3-foot “pet dinosaur” out for a walk around the museum!

Seeing that we had plenty of room to work with in this museum, Ron put together a display for the Sodom & Gomorrah material that was very similar to the display we had in the museum in Gatlinburg.

He also did another “sand sculpture” around the base of the display!

Pyramid Building Machines (below) — Ron set up an even BIGGER lift machine on display in the Nashville museum than I had in Gatlinburg — and they could even give “rides” to people on this one, as you can see on my Special Video #1 ! 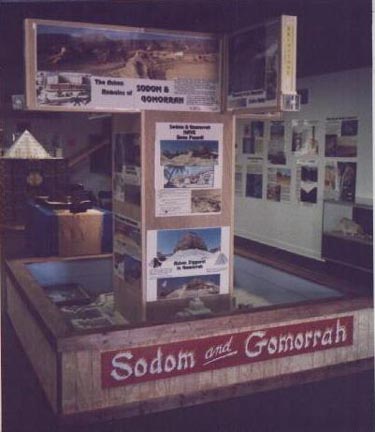 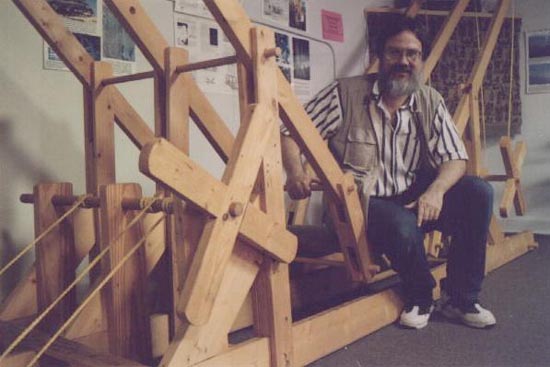 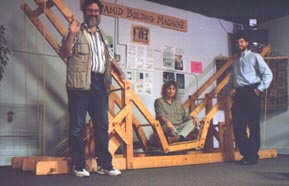 The 2nd Ark of the Covenant Display

As you can see, we tried a very different design for this display, and we set it up in one of the side rooms off of the main display room in the Nashville museum.  Once again it was a challenge to build — and when the museum was closed down, this display was not saved. 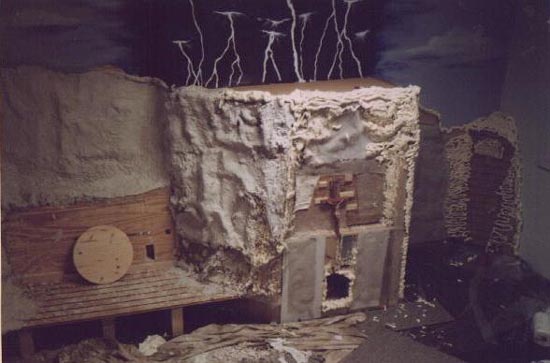 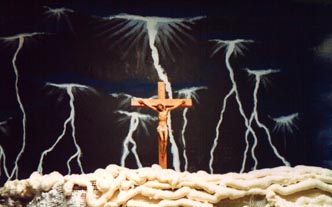 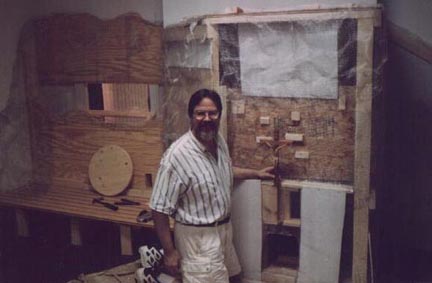 After the Nashville museum was up and running, Ron was quite often out-of-town doing his presentations or working overseas, so it was a rare treat for me and Sandra to be able to come to town and be able to spend some time together with both Ron and Mary Nell — this was a photo taken in the small restaurant that was inside the Nashville museum building.  Now that Ron is no longer with us, even the “simple things” like having a meal with him can be a very, very special memory. 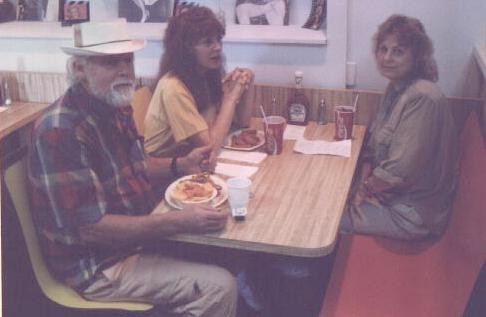 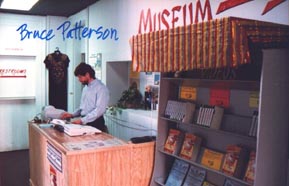 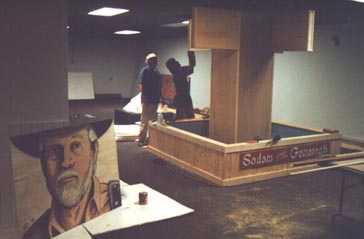 Bruce and Ron working on the Sodom & Gomorrah display. 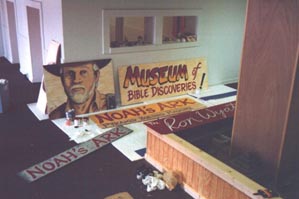 My various signs that I painted for the displays. 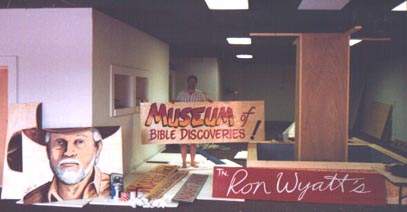 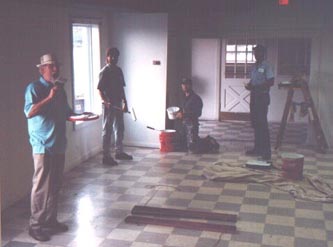 A cute shot of Ron “clowning around” pretending to eat his paint brush!  (I guess we were getting hungry waiting for lunch to get delivered soon!)  That’s Bruce holding the paint roller, Randy Osborn mixing the paint, and another local fellow giving us a hand — and of course I’m behind the camera. 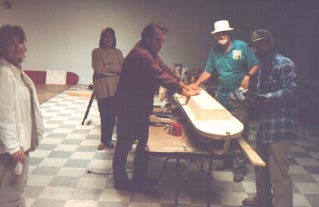 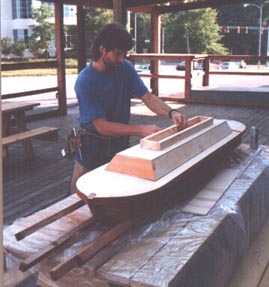 This is two photos spliced together to give a “wide angle” view of the museum. 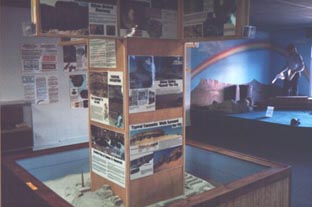 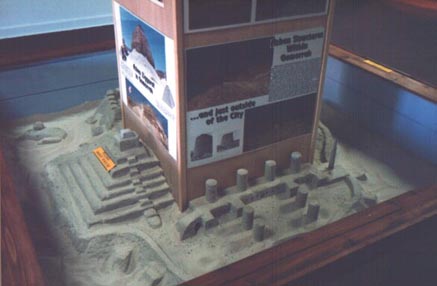 A close up of the Sodom & Gomorrah sand sculpture we did to resemble the one in Gatlinburg. 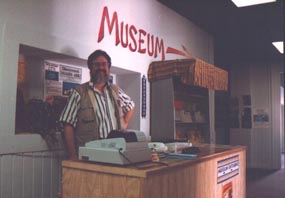 Me at the front counter. 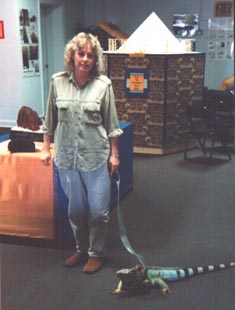 My wife Sandra taking the museum’s “dinosaur” for a walk. 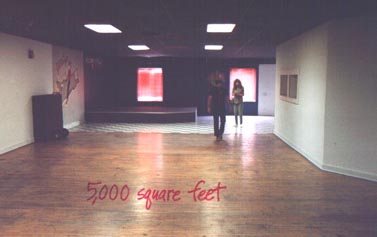 A couple of pictures back when Randy Osborn and Mary Nell and myself first visited the building. 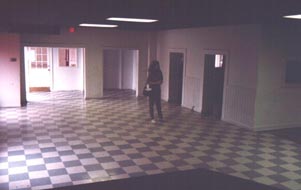 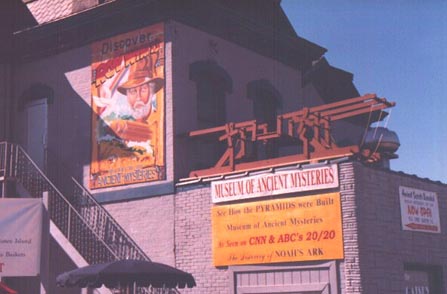 Ron decided to re-do the signs on the outside of the building.  My original sign included the phrase “Bible Discoveries” in it — Ron did not want to scare off non-religious tourists, so Ron changed the title to “Museum of Ancient Mysteries.”   Ron also put one of his pyramid machines up there on the roof of the building, and another local artist did the giant painting of the Noah’s Ark book cover. 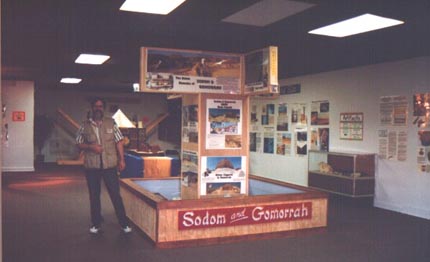 Again, this museum was only open for about 8-9 months, and closed in November 1995.