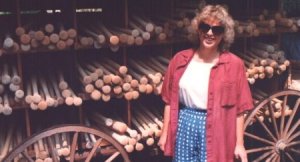 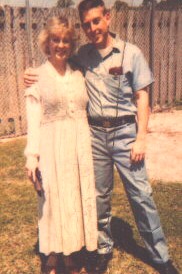 This is one of the biggest burdens that weighs upon my wife’s heart — her one and only son, Roger, has been locked up in a Florida prison for the past 7 years.  Sandra gave birth to Roger a year after she got married for the first time back when she graduated from high school in 1964 — and then her hubby joined the Army and went overseas and abandoned her!  Sandra had to raise Roger by herself, with her parents’ help, and her 1st husband has never let Roger back into his life — (some people are real JERKS!)   Roger married a girl he got pregnant in 1991, but 3-4 years later that woman drove him to having a breakdown — he committed a major crime, and he got caught — the devil got him good — Roger will be in prison for the next 50-75 years, unless we can get him sentencing relief.  Fortunately, the Lord used this episode to bring Roger to the foot of the cross, and Roger turned his life over to the Lord back in 1993 — and Roger now has himself a REAL “prison ministry”!  Roger is a blessing to all the people he comes in contact with in that Florida prison, but this whole event still makes Sandra weep.  She drives down there to see him twice a year, and talks to him on the phone every week — and she really, really wishes Roger wasn’t there. 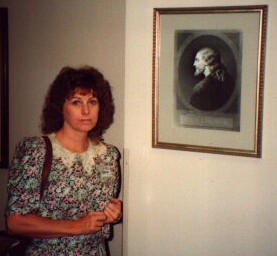 Sometimes all you can do is “trust the Lord” — here is Sandra next to the portrait of Jesus at the GC that Sister White said most resembled the Lord she had seen in vision. 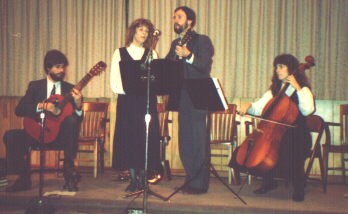 One of the things Sandra enjoys to do is singing — this is a 1990 photo of her singing with the “Sabbath Rest” group.  That’s Bruce Patterson on the left (he managed Ron’s museum in Nashville in 1995) — they recorded 2 really nice songtapes before they stopped touring.  Sandra used to sing in the Florida Opera years and years ago, and she has even sung in Westminster Abbey in England and she did a small song on stage at the Kennedy Center in Washington D.C. — she loves classical music, and she is NOT happy seeing “rock ‘n’ roll” sneak into our churches! 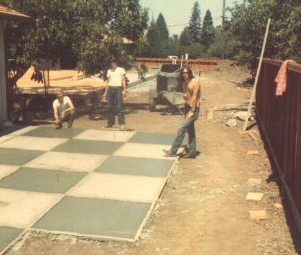 ABOVE:  Isn’t life strange?  All the things we get to do over the years — there it is, a day “long gone,” a 1970 picture of me (on the right) and my brother helping my Dad (on the left) do the cement for the patio in our backyard.  Thirty years ago!   Amazing things, cameras! 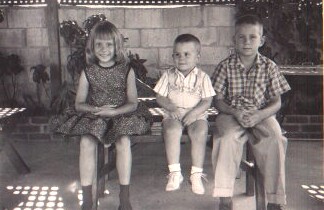 I hope you enjoyed this BIO of this guy named “Jim Pinkoski” !

*(My full name is James Arthur Pinkoski — but I almost got named “Arthur James” — and I always wondered if I would have ended up being a more successful artist if everyone had called me “Art”! Hmmmmmmmmmmmmm . . . I guess we’ll never know . . . )